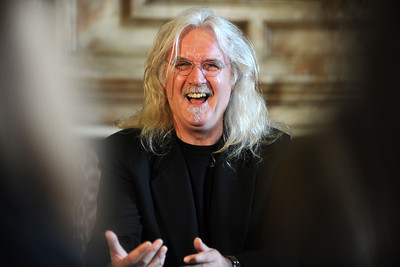 Sir Billy Connolly, a Freeman of the City of Glasgow, is backing the charity campaign to raise public money for a statue in memory of the late South African President, Nelson Mandela.

The Big Yin spoke of his delight at joining a trio of prominent Glaswegians, similarly honoured by the city, who have signed up as patrons of the Nelson Mandela Scottish Memorial Foundation (NMSMF) - Sir Alex Ferguson CBE, Kenny Dalglish MBE and Lord MacFarlane of Bearsden.

The charitable foundation aims to mark the centenary of the late South African President's birth, by raising £250 000 to commission a memorial in Glasgow and deliver associated educational programmes.

Planning permission is already in place for a statue at the city's Nelson Mandela Place.

Imprisoned for 27 years for his resistance to apartheid, the iconic South African leader was made a Freeman of the City of Glasgow in 1981, while still in jail.

Later that year Glasgow's Lord Provost Michael Kelly launched a world-wide Lord Mayors petition calling for the release of Nelson Mandela at the United Nations in New York. The petition was signed by thousands of Mayors, contributing to the global movement to secure his freedom.

Mandela was finally released from jail on Sunday 11 February 1990.  This weekend marks the 28th anniversary of that historic moment.

In 1993 Mandela famously collected his honour in person addressing an enthusiastic crowd of 15,000 in George Square.

Sir Billy Connolly CBE said: "I am honoured and delighted to join the impressive line-up of worthy Glaswegians as a patron of the campaign to build a statue to Nelson Mandela in Glasgow. I met Mr. Mandela in Oslo, Norway, where he received the Nobel Peace Prize. He left an impression on me that I will never forget."

The foundation was launched on 9 October last year to coincide with the 24th anniversary of Mandela's visit to Glasgow by patrons Sir Alex Ferguson and Lord Provost Eva Bolander alongside Brian Filling, Chair of the Nelson Mandela Scottish Memorial Foundation and Honorary Consul for South Africa.

Professor Denis Goldberg, a political prisoner who spent 22 years jailed as a co-accused in the same trial as Mandela, is another prominent patron.

The Lord Provost said: "Naturally, I'm thrilled that Sir Billy is supporting the foundation. It's wonderful to have him on board. I'm incredibly proud of Glasgow's brave history of condemnation of the cruel incarceration of the late, great Nelson Mandela and its steadfast and principled stand against apartheid."

Mandela was among those who congratulated Sir Billy Connolly when he was made a Freeman in 2010.

He wrote to the city welcoming one of its "....most beloved sons ... to a very special club." And shared fond memories stating: "In Glasgow I was met with such a warm and heartfelt welcome, I can never forget it. On that most memorable day I saw that Freedom, Brotherhood and Justice are the ideals that make up the bedrock of your great City."

Remarking on the irony that, the city's former St George's Place - then the location of the apartheid-supporting South African Consulate - was in 1986 renamed Nelson Mandela Place, in honour of the regime's most famous political prisoner.

Brian Filling said: "I'm delighted to welcome Sir Billy Connolly, a Freeman of the City of Glasgow, as the latest patron of the Nelson Mandela Scottish Memorial Foundation. He joins a list of celebrated Glaswegians, who have received that honour, lending their support to our cause.

Further information about the foundation and how to donate can be found here: