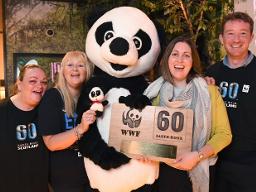 Glasgow has been hailed Scotland's Local Authority Champion in recognition of its support for Earth Hour.

WWF Scotland has awarded Glasgow City Council the honour for the work it does to raise awareness of the annual global event which encourages people to protect the planet by conserving energy and symbolically switching off lights for an hour.

The award was presented by WWF Scotland's Panda mascot to Councillor Anna Richardson, City Convener for Sustainability and Carbon Reduction, who said: "This is a great achievement and I am delighted to receive this award on behalf of  Glasgow City Council for its efforts during Earth Hour 2017."

Last year Glasgow's Earth Hour event was so successful it attracted more than 600 people to the Winter Gardens where council staff had organised a host of events and activities from a mobile planetarium, meteorite handling and telescope observing sessions, to an evening bike ride and nature walks.

More than 180 countries around the world take part in Earth Hour and in previous years iconic structures like the Eiffel Tower and Sydney Opera House have been plunged into darkness to demonstrate how everyone can make a difference to the environment by conserving energy.

Sam Gardner, Acting Director of WWF Scotland, said: "I'm delighted to be able to recognise Glasgow City Council for all their ongoing efforts in support of Earth Hour.

"This award signifies the resounding commitment of the council to promoting environmental awareness. With one in six species threatened by climate change there has never been a more important time to act to protect our planet. Last year, Glasgow joined people from 187 countries in signing up to a record-breaking Earth Hour.

"We look forward to working with Glasgow City again for Earth Hour 2018 on Saturday 24 March."

To mark the occasion this year, Glasgow is planning a special night at the Kelvingrove Art Gallery and Museum - further information will be available soon.

In addition, lights will be turned off at venues across the city including the City Chambers, the Glasgow Cathedral, the Mitchell Library and the Doulton Fountain.

Councillor Richardson is hoping city residents do their bit to help conserve energy, cut carbon emissions and safeguard the environment.

She said: "Sustainability and climate change are key issues for Glasgow. They not only affect every one of us today but will also impact future generations.

"Glasgow is striving to become one of the most sustainable cities in Europe and by supporting Earth Hour we can all make a difference to help protect our planet.

"This year our Earth Hour event will be even bigger with a host of activities for all the family to enjoy and I really hope the people of Glasgow come along and show their support."

Full details of Glasgow's event on Saturday, 24 March 2018 will be announced soon.

Glasgow City Council has now won Local Authority Earth Hour Champion twice (2015 and 2017), and been runner up twice (2014 and 2016), for the work undertaken on awareness raising for Earth Hour.