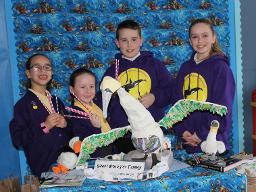 Young anti-plastics campaigners will lobby Glasgow's licensed trade at the launch of the city's licensing "Oscars".

Pupils from Sunnyside Primary School will promote their #NaeStrawAtAw campaign at the 2018 Best Bar None Glasgow awards launch in the Grand Central Hotel on Wednesday, April 18th.

The school's Ocean Defenders are campaigning for an end to the use of single use plastics like straws and urging businesses to switch to more environmentally-friendly alternatives. They've already convinced numerous high profile organisations  - including Glasgow City Council and Calmac ferries - to stop using plastic straws.

And now Best Bar None Glasgow is incorporating the campaign into their annual accolades which recognise best practice among the city's pubs, clubs, hotels and specialist venues.

For the first time, extra credits will be awarded to licensees who can prove they have taken steps to reduce their use of plastic straws and this could mean the difference between them earning a prestigious Gold, Silver or Bronze trophy.

Registration for this year's awards will open at the trade event and an independent assessor will later score premises on the work they do to enhance public safety and customer care. In 2017, a record breaking 89 Glasgow venues entered and 74 Gold awards were presented along with 14 Silver and one Bronze.

Eleanor Lee of Community Safety Glasgow which runs Best Bar None Glasgow, said: "Year-on-year, the BBN Glasgow awards have grown in size and stature and we aim to make 2018 the most successful yet. I'd encourage the city's licensees to come to the trade event and find out more about the awards and what they entail."

BBN Glasgow was Scotland's first trade initiative of its kind and it has now been replicated across the country. Now in its 14th year, it is leading the industry charge against plastic pollution by backing the Ocean Defenders.

Eleanor said: "We are absolutely delighted to support Sunnyside Primary's #NaeStrawAtAw campaign and have the pupils attend the launch. I know that some of our members are already taking steps to reduce the use of plastic and I'm sure the Ocean Defenders will convince many more to get on board. They are very impressive speakers and knowledgeable about the harm done by plastic pollution.  I'm sure they will help convince even more of the licensees to further reduce their use of plastic."

Lisa Perrie, Sunnyside Primary School teacher, said: "The pupils are excited about meeting the licensees and telling them about their #NaeStrawAtAw campaign. Their arguments for ending the use of plastic straws are very convincing and this is a great opportunity for them to address a trade which uses thousands of straws every day.

"I'd like to thank Eleanor for embracing the pupils' campaign, adopting it as part of the awards and inviting the pupils to speak directly to the licensees. If all the Best Bar None premises stop using plastic straws, it would be a major coup for the kids and hugely beneficial for wildlife and our natural environment."

Best Bar None Glasgow is a community safety initiative that works to encourage and enhance best practice among the licensed trade and is delivered on behalf of Glasgow Alcohol & Drugs Partnership in partnership with Community Safety Glasgow, the Scottish Business Resilience Centre, Glasgow City Council, Police Scotland and the licensed trade. Premises are judged on their efforts around the Prevention of Crime & Disorder, Securing Public Safety, Prevention of Public Nuisance, Promotion of Public Health and Protecting Children from Harm.

The overall winners of Glasgow's Best Bar None awards go on to compete in the national awards where The Garage was recently crowned Scotland's Best Night Club.

Launch attendees will also hear from speakers at the networking event which will feature three trade workshops.

Licensees can log on to www.bbnglasgow.com for an entry form and further details about the awards. Alternatively they can call Louise McMonagle for more information on (0141) 276 7552.