The council's Neighbourhoods, Housing and Public Realm Committee considered the Masterplan, a vision for the regeneration of this strategically important location which has been developed by Govan Housing Association (Govan HA), Central Govan Action Plan (CGAP), the council, and Collective Architecture. 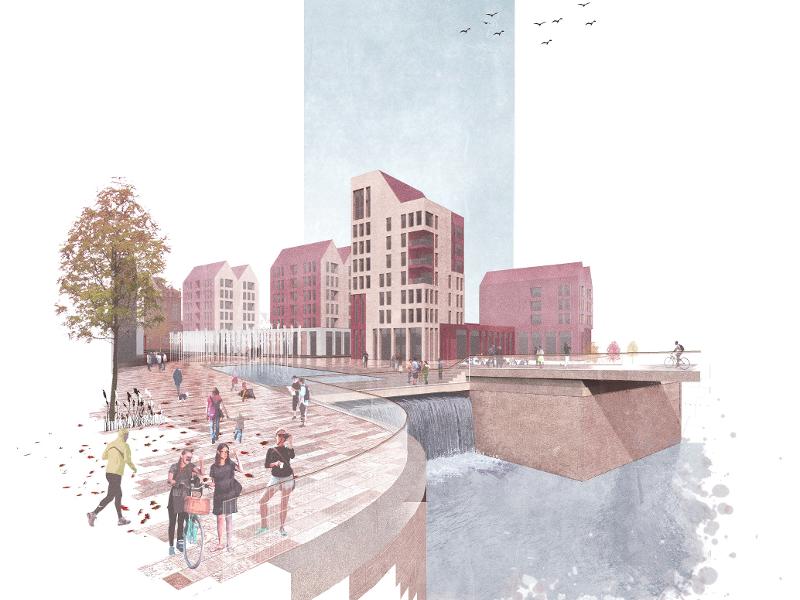 The Masterplan features a proposal for a mixed-use scheme providing 200 new homes (159 flats and 41 terraced houses/townhouses mainly for mid-market rent) and 3,500 square metres of commercial space, set within high-quality public space. It also integrates the south landing of the planned Govan-Partick Bridge, onward walking and cycling connections and the proposals for the redevelopment of the Category A Listed Govan Old as a cultural destination and enterprise hub.

Water Row was historically a key site for Govan and the wider city, being a significant crossing point across the Clyde and home to shipbuilding companies. In more recent times, it has become underused and is currently the site of an informal car park and two showpeople yards.

The Water Row Masterplan aims to make the most of the assets in the immediate area, including its unique heritage and cultural offering, excellent connectivity and distinct riverside location, along with the forthcoming Govan-Partick bridge and the West End and Waterfront Innovation Quarter, which has Water Row at its heart.

The Masterplan was developed through extensive consultation with the community and partner organisations, including five public events, a series of design and other issues workshops, meetings with showpeople representatives, and a presentation to the Glasgow Urban Design Panel taking place between December 2017 and June 2018. Previous planning work and consultation in Govan over the past decade or so also helped to inform the Masterplan.

The preferred layout for the Masterplan developments was determined via an options appraisal, with particular consideration given to the future of the two showpeople yards. The option appraisal concluded that neither yard could be retained, principally because the land requirement disproportionately impacts on site capacity, restricting population growth. Both showpeople families were fully informed of this outcome in writing.

Councillor Kenny McLean, City Convener for Neighbourhoods, Housing and Public Realm at Glasgow City Council, said: "The Water Row Masterplan points the way forward to a comprehensive regeneration of a location that will grow in importance to the city in future years. The Masterplan will not only bring new homes, businesses and jobs to Central Govan, but is also key to making the most of all the assets that the area has to offer. Water Row will be a focal point in the regeneration of not only Govan, but the banks of the Clyde and the growing connections between communities and organisations on both sides of the river."

The estimated total development cost of the Water Row Masterplan is £56.85 million. Development will be brought forward in three phases, with Phase 1 expected to commence in early 2020 and complete by May 2021.