What is the Bin Replacement Programme (BRP)?

The Bin Replacement Programme invested in improving local neighbourhoods by removing small metal dustbins from the backcourts/common bin areas of flats and tenements and replacing them with larger wheeled bins free of charge.

45,400 larger wheeled bins were provided. These are of various sizes, determined by available space and access and egress to the bin storage area in the backcourt/common bin area. This equates to almost 11.3m litres of capacity.

31,000 additional blue wheeled bins, for the collection of paper, cardboard, plastic bottles and empty cans, were provided. This equates to almost 9.4m litres of additional capacity for recycling.

Why were the small metal galvanised bins replaced?

Glasgow tenements and flats had around 48,000 small metal dustbins in backcourts or common bin areas of flatted properties, affecting around 1/3 or properties. The bins were no longer fit for purpose and were often in poor condition, which led to the spread of litter in backcourts, encouraged vermin and created health and safety issues for both residents and Cleansing operatives.

The Bin Replacement Programme addressed these issues by removing small dustbins from tenements/flatted properties in the city and replaced them with modern general waste and recycling wheeled bins.

When were the bins replaced?

The Bin Replacement Programme was delivered in 3 phases, over three years, in the following areas -

Each resident was sent a letter and promotional material prior to the replacement wheeled bins being provided and bins being removed.

How many bins were provided to each close?

This was based on the number of flats in each close and whether standard or larger wheeled bins were suitable for the specific bin store/back court.

It should be noted that we do not provide an individual wheeled bin for each flat.

How will the programme benefit residents?

The replacement bins will bring significant benefits to residents in flats through reducing vermin infestation and over-flowing bins, increasing recycling opportunities, reducing waste to landfill or other treatments and reducing missed collections. 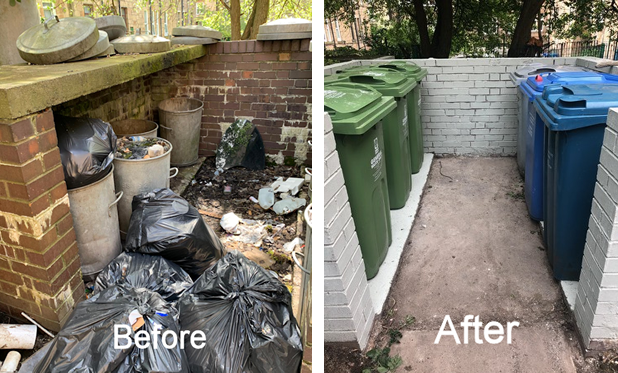 An example of work carried out by residents at an address in the Southside.