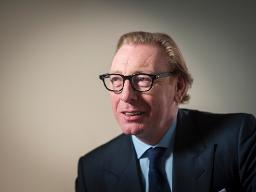 Under Benny's leadership, Tesco Bank has grown to become one of the most established 'new' banks in the UK, serving more than 6 million customers and employing 4,000 people in Edinburgh, Glasgow and Newcastle. With the launch of the Tesco Bank current account in June of 2014, the Bank now offers a full range of core retail banking and insurance products.

Benny holds a First Class Honours degree in Mathematics from the University of Glasgow and became a Fellow of the Faculty of Actuaries in 1986 after qualifying in a then record 2.5 years. He is a Fellow of the Chartered Institute of Bankers in Scotland, a member of the Scottish Government's Financial Services Advisory Board (FiSAB) and a member of the Financial Capability Board.

In September 2017 he was asked by the First Minister of Scotland to lead the proposal for the creation of a Scottish National Investment Bank.