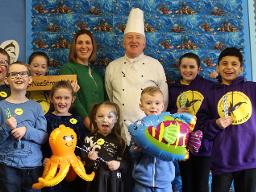 Persuasive pupils from Sunnyside Primary School in Craigend, are waging war on plastic pollution and their impressive campaign has inspired Glasgow City Council to switch to more eco-friendly options.

From the end of February, Encore, the council's commercial catering division, will no longer provide straws with customers' drinks and people who ask for one, will receive an eco-friendly alternative. The use of pre-packaged drinks supplied with plastic straws will also be reviewed to see if more environmentally friendly options are feasible.

The decision applies to more than 26 cafes in the council's museums, sports centres, offices, schools and the city chambers. It will prevent tens of thousands of plastic straws a year going to landfill. Dropped straws can also be blown into into rivers and end up in the sea where they threaten seabirds, turtles, whales and dolphins. Micro plastics can get into the food chain if accidentally eaten by fish.

The announcement brought whoops of delight from Sunnyside pupils who were also instrumental in helping their peers in Ullapool convince all 14 businesses in the village to ditch the straws.

Lisa Perrie, Principal Teacher, Sunnyside Primary, said: "This is fantastic news and the children are absolutely thrilled. They have worked so hard on this campaign and the results have been amazing. We've had tremendous support and Glasgow City Council's announcement is a major boost.

"It shows the children they can make a big difference in the world and that their views really matter."

She said: "I'm delighted to announce that single use plastic straws will not be on offer in all council-run cafes and restaurants from the end of February and that they will be replaced by eco-friendly alternatives. Sunnyside Primary School's #NaeStrawAtAw campaign has been the deciding factor in this move and the pupils are to be congratulated on their impressive lobbying skills. They are a true force of nature - highlighting the plight of marine wildlife and encouraging businesses to join their campaign. It is an absolutely pleasure to announce Glasgow City Council's backing for the campaign which will help protect our marine environment for wildlife and future generations. "

Last week, the school's Ocean Defenders won support from Best Bar None Glasgow - which runs an annual awards scheme involving almost 100 pubs, clubs and licensed premises in the city. Venues which reduce plastic straw useage are to receive extra credits in the awards which recognise good practice among the licensed trade.

Follow #NaeStrawAtAw on twitter to hear the latest on the pupils' campaign which was carried out as part of their Schools Charter work.