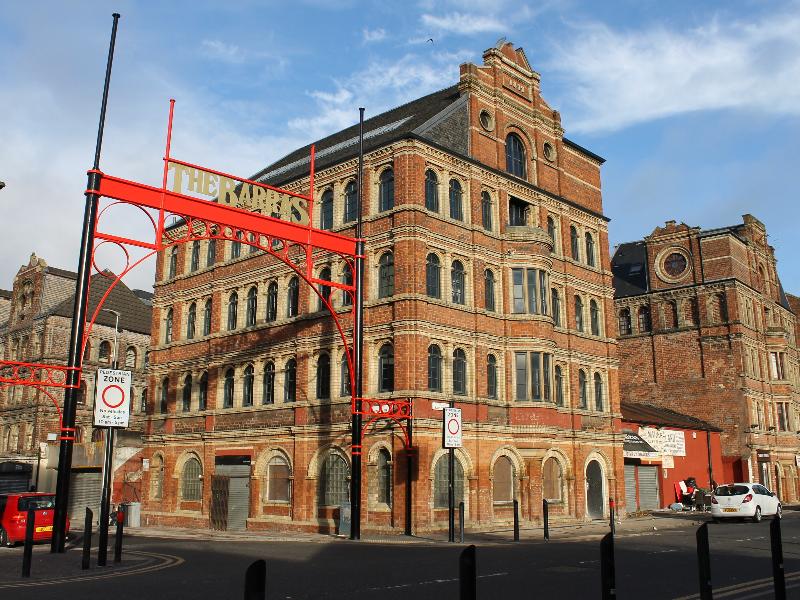 East End based artists Bespoke Atelier, have taken inspiration from creative pupils at a Calton primary school when designing decorative plaques set to be laid beneath each of the recently refurbished The Barras signs.

The celebrated steel arches are looking resplendent, having undergone a programme of repairs and repainting as part of major works to regenerate the Barras Public Realm which is funded through the £27m City Deal Collegelands Calton Barras infrastructure programme.

This artist-led project involving St Anne's primary, has seen local surface designers Bespoke Atelier take inspiration from material produced by the children following their visit to the Barras and subsequent participation in workshops; as stimulus to create the final four designs.

Today (8 March) pupils from St Anne's took up the artists' invitation to an exhibition at the nearby Barras Art and Design (BAaD), which showcases how the four plaques will look and how their own artistic endeavours inspired the intricate final designs.

Cllr Kenny McLean, City Convener for Neighbourhoods, Housing and Public Realm, said: "The Barras Public Realm project, funded by Glasgow City Deal, is significantly transforming this important part of Glasgow. Improvements already delivered have had a hugely positive effect, acting as a catalyst for further investment and activity in the area. The Barras signs are looking like new and the addition of decorative plaques, the design of which has been influenced by local schoolchildren, will be a welcome addition, further contributing to the much improved amenity of the area.

Marion Parola, Designer and Director at Bespoke Atelier said; "The children from St Anne's have been integral to the creative process and their keen observations of the Barras inspired many of our design ideas. I was delighted to see them again and I hope that they are proud of the influence they've had on what will be part of the streetscape in an area close to their school".

Marie Hamilton, Depute Headteacher of St Anne's Primary School said; "Our children had a wonderful time seeking inspiration from their visit to the Barras and they came back to the classroom full of ideas and enthusiasm which translated into exceptionally thoughtful artwork. It's lovely for them to be invited along to BAaD to see how their creativity has influenced the final designs".

The exhibition by Bespoke Atelier which includes the four decorative plaque designs is open to the public at Barras Art and Design between the hours of 12:00-21:00 from 8 March 2019 until 17 March 2019 (excluding Mondays).