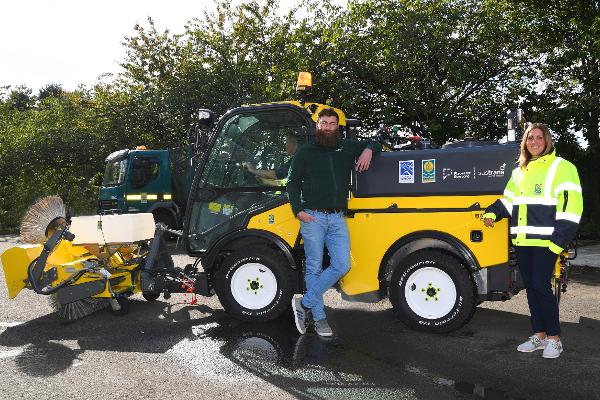 City cycle ways are being sprayed with salt solution for the first time this year as a way to keep people on their bikes this winter.

It follows a decision for the council to join forces with active travel charity Sustrans and Transport Scotland to purchase a new vehicle that is specially designed to spread salt solution, or brine, as a way to de-ice segregated cycle paths.

Brine is accepted as the most effective and safest way to treat cycle ways during winter weather and reduce the risks associated with travelling when there are icy conditions.

As the salt is already in solution, it starts to work immediately on the ice and does not require to be broken down by passing traffic, as is the case with the traditional grit. It also reduces the risks of bikes skidding on grit, which bike groups have identified as an issue.

Councillor Anna Richardson, City Convener for Sustainability and Carbon Reduction, said it is a key objective to ensure the bike remains as a travel option, even during the depths of winter.

Councillor Richardson said: "Even with a growing amount of dedicated cycle routes in the city, winter conditions can very off putting for people who cycle. But if we are to see a sustained switch to cycling as a routine form of transport then we must make the most of our cycle lanes all year round.

"Using salt solution was found to be the best way to make our cycle lanes as safe as possible during winter and so we are delighted to introduce a new saline spraying vehicle to our winter fleet.  Whenever gritters are called upon to treat our top priority roads for cars and other vehicles, we will also instruct the cycle ways to be sprayed with brine.

"Encouraging more people to cycle is critical to our effort to decarbonise the city's transport system. As part of the effort to tackle climate change, we have to do everything we can to make cycling a viable option twelve months a year."

When called into action, the vehicle, which has a capacity of 500 litres of solution, will generally be deployed from 5am to deal with low, morning temperatures. It will take four hours to complete all of the cycle ways targeted for spraying.

Dave Keane, Infrastructure Delivery Manager for Sustrans Scotland said: "Icy paths are a bugbear of people who want to walk, cycle or wheel year round. We hope that the combination of Glasgow's growing network of segregated cycle routes and the use of salt solution to keep them clear will make year-round cycling a choice for more people as they travel to school or work.

"This is the first time that a path clearing machine like this has been used by a Scottish local authority and we are keen to see the results over the coming months."

As part of the winter plan for cycle ways, Route 75 on the National Cycle Network will also be gritted within the Glasgow City area, which means from boundary with South Lanarkshire at Carmyle, through Glasgow Green and as far as the Bell's Bridge on the Clyde Walkway.

A full map of where winter maintenance action for cyclists will be taken can be found as part of the Winter Gritting Guide on the council's website.