A two-minute silence will be observed at 11 am at the cenotaph in George Square, Glasgow, on Sunday 10 November to mark Remembrance Sunday. 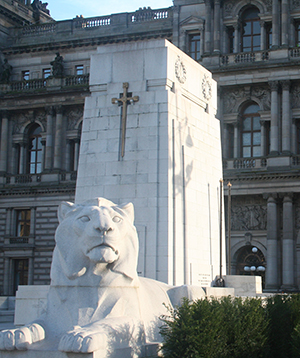 The Deputy Lieutenant said: "Remembrance Sunday is a day for reflection and gratitude for those who gave their lives in conflict to preserve our freedoms. Glasgow owes its military and veterans a great debt.

Others attending include Gillian McGregor for the Secretary of State for Scotland, Will Kerr, Deputy Chief Constable, Police Scotland and Paul Stewart, Assistant Chief Officer, Scottish Fire and Rescue.

Representatives from Legion Scotland, serving military, clergy and others from civic life will also be there.

A Guard of Honour will be provided by 43 Commando Royal Marines.

Music will be performed by the Band of HM Royal Marines Scotland, the Royal Airforce Pipes and Drums and Glasgow Youth Choir.