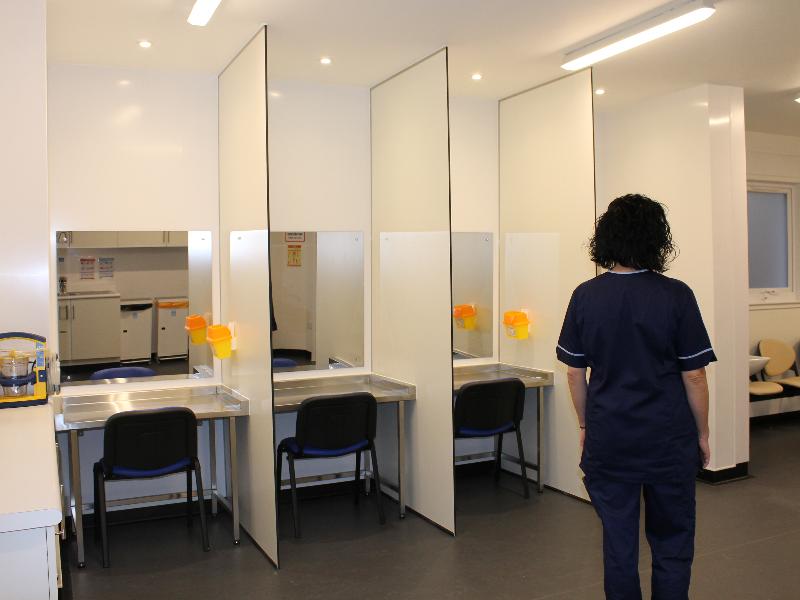 A team of top researchers from the University, working with NHS Greater Glasgow and Clyde, Kings College London and the MRC/CSO Social and Public Health Sciences Unit at the University of Glasgow will carry out a major study into the Glasgow service during its first two and a half years.

Scientists will explore all aspects of how the service is implemented, including views from both service staff and patients, and the findings will be used to shape the future of the facility as well as to develop a blueprint for similar services in the UK and around the world.

The new heroin assisted treatment facility is the first of its kind in Scotland, where drug users at greatest risk of harms are prescribed pharmaceutical grade heroin (diamorphine). Patients will then administer the diamorphine themselves at the facility under the direct supervision of an experienced nurse.

The provision of heroin assisted treatment is part of the Enhanced Drug Treatment Service (EDTS) created by Glasgow City Health and Social Care Partnership in response to the city's drugs crisis. For those accessing the service, it is anticipated that the treatment will help reduce their street heroin use, drug-related crime and set users on a stable path to recovery.

Susanne Millar, Chair of Glasgow's Alcohol & Drug Partnership and Interim Chief Officer of the city's Health & Social Care Partnership, said: "Independent evaluation of our new Enhanced Drug Treatment Service is critical for us and will provide us with key information and analysis which will inform treatment strategies going forward.

"Sadly, the rise in drug-related deaths is a nationwide issue and Glasgow's facility is the first of its kind in Scotland - so the evaluation by Glasgow Caledonian University will also be of interest to other cities who are considering how to best save lives and tackle this national public health emergency."

Dr Andrew McAuley, a Senior Research Fellow in the School of Health and Life Sciences at GCU and Principal Investigator on the study, explained: "The research is an evaluation of how the heroin assisted treatment service is implemented within the Glasgow context of widespread polydrug use, epidemic levels of drug-related deaths and an ongoing outbreak of HIV among people who inject drugs.

"There is already a strong body of evidence to show that heroin assisted treatment as an intervention is effective within a controlled research environment. However, little is known about how best to implement heroin assisted treatment in the real world, so we are conducting what we call an implementation science evaluation which tries to understand how the service works, for whom, when and why.

"It involves an in-depth exploration of the experience of the people involved in the service including patients, the staff delivering the service and wider stakeholders that the service is likely to impact on including the police, social work, housing and homelessness services.

"Ultimately, our aim of this evaluation is to understand how it's implemented in Glasgow and to shape the development of that service moving forward. We also aim to create good practice guidance so that other areas in the UK and other parts of the world looking to implement this type of service can learn from the experiences in Glasgow and implement their own service effectively."

Drug-related deaths in Scotland are at a record high with over 1000 lives lost in 2018. Earlier this year, research led by Dr McAuley revealed that Glasgow is experiencing the largest HIV outbreak among people who inject drugs in the UK for more than 30 years.

Dr McAuley said: "The findings of this research provided further justification for interventions such as the proposed drug consumption room and heroin-assisted treatment services in Glasgow.

"Glasgow has a pressing need at the moment for this kind of intervention because it has such high rates of overdose and harms associated with people injecting in public places in the city.

"Several clinical trials have shown that heroin assisted treatment reduces illicit drug use, criminal activity and improves the health and wellbeing of patients who have not responded well to traditional treatments such as methadone."