Contributing to Glasgow's ambitious target of becoming carbon neutral by 2030, First Glasgow has announced that it's to roll out into service, two fully electric buses - becoming the city's first operator to introduce this type of vehicle onto a commercial bus route since the 1960s. 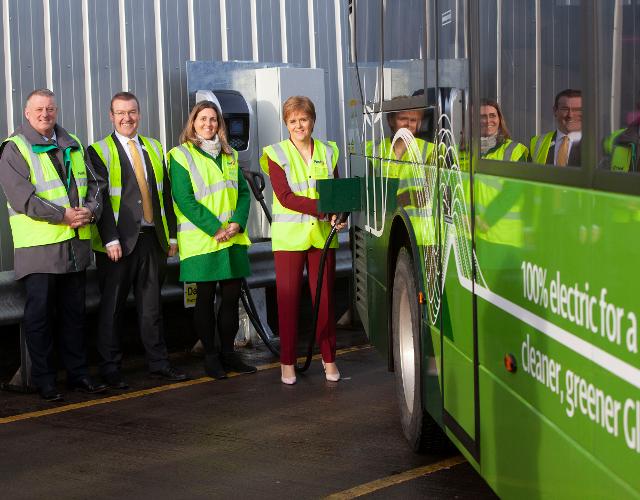 Funded as part of SP Energy Networks' £20million Green Economy Fund, the fully electric state-of-the-art vehicles will serve the M3 route, which connects communities in Milton and Springburn with Stobhill Hospital and the city centre.

The brand new buses were revealed this morning on Glasgow's George Square before going on a tour of the city. Pupils from St Joseph's Primary School were among the first passengers to hop on board, joining Councillor Anna Richardson, City Convener for Sustainability and Carbon Reduction. 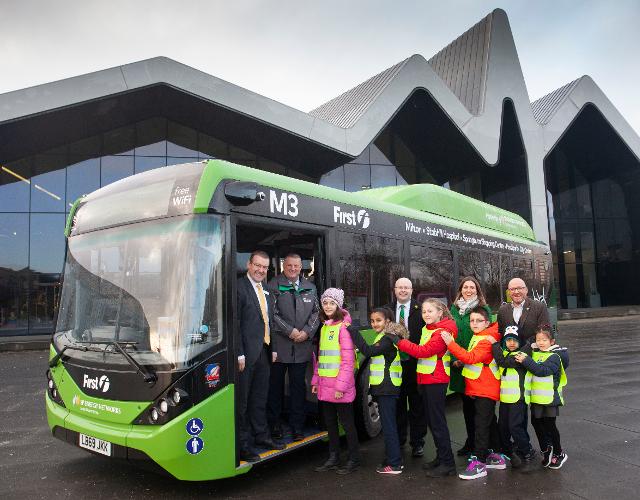 This initiative follows on from First Glasgow's recent investment in 150 brand new low emission vehicles and the retrofitting of another 49 mid-life vehicles to speed up their switch to cleaner vehicles in support of Glasgow's city centre Low Emission Zone (LEZ). Introduced in December 2018 to reduce emissions and protect public health, Glasgow's LEZ is Scotland's first, and is modelled to reduce levels of harmful air pollution from road traffic.

As part of the phased implementation of Glasgow's LEZ (which presently affects local service buses only) at least 40% of journeys through the city centre are now being made by buses that meet the required emission standard, and follows significant investment by the main city operators into their fleet.

Councillor Anna Richardson, City Convener for Sustainability and Carbon Reduction at Glasgow City Council said: "I'm delighted that Glasgow will soon see these fully electric buses on commercial routes within our city, further incentivising bus travel as a clean and sustainable alternative to the car.  First's commitment to improving air quality, through their recent investment in brand new low emission buses and retrofitting a significant number of their existing fleet, is to be welcomed.

"Removing carbon emissions from the city's transport system is also vital if we are to achieve the city's target of becoming carbon neutral by 2030.  Introducing electric buses into the city is a big step forward in Glasgow's efforts to tackle the climate crisis."

Andrew Jarvis, Managing Director for First Glasgow, said: "We are delighted to launch the city's first conversion of a commercial bus service to fully electric operation. The whole team at First Glasgow are thrilled to be teamed up with SP Energy Networks in order to bring these state-of-the-art zero emission vehicles to the people of Glasgow and the M3 route.

"The M3 connects communities in Milton and Springburn with Stobhill Hospital and the city centre and it was a natural route for us to introduce these buses which are fitted with 330kwh batteries as well as USB chargers for customer use, free Wi-Fi and onboard audio-visual next stop announcements to make bus travel even easier and more convenient for customers as well as better for the environment.

"Every customer journey on the route will save around 2kg of CO2 compared with driving on your own in an average car, making bus the best choice in reducing the impact on the planet.

"As a business, one of our main goals is to make buses part of the solution when it comes to improving air quality in the city. We've already invested £31million in the last two years. By working with Glasgow City Council and Transport Scotland, we plan to make great strides forward in doing our bit to improve the city's air quality and making Glasgow a cleaner and greener place to live and work."

One of the buses will now go on display at the Riverside Museum until Sunday the 12th of January, so people across Glasgow can see for themselves, before the vehicle goes into service on the M3 route from Monday 13th of January.

So far, 33 projects have been awarded funding from SP Energy Networks across Central and Southern Scotland. Visit the Green Economy Fund for more information.