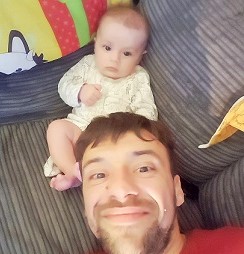 New dad, Michael Wright, plans to jump out of a plane at 10,000ft to thank Glasgow's Housing First scheme for helping him rebuild his life after homelessness.

In August, Michael is due to take part in a sponsored skydive to raise money for the Salvation Army which provides support to homeless people on behalf of the city's Health & Social Care Partnership (HSCP).

Glasgow's Housing First programme provides secure, mainstream tenancies to homeless people with complex needs and the Salvation Army is contracted to provide people with intensive support to help them keep their homes and build new lives.

Michael became homeless in March 2018 following the end of a long term relationship. Losing his family home and missing daily contact with his nine-year-old son, his mental health suffered and he also went on to lose his job. The diabetic's physical health deteriorated and he found himself in and out of hospital with stomach problems.

The 35-year-old said: "I was really low. I was too proud to go back to my mum and dad's. I wanted to try to get a house of my own but I couldn't afford the rent. I found myself just walking about and I ended up going to homelessness services in Rodney Street."

Homeless services found him temporary accommodation in a hostel and he was later recommended for Housing First.

In September 2018, the HSCP found him a one bedroom Housing First flat in Hillington and, since then, Michael hasn't looked back. Five months after moving in to his new home, he met his new partner, Deborah, and they went on to have a baby boy, Freddie, in December 2019. He has also passed his driving test and hopes to find work supporting other homeless people.

Michael said: "Housing First has been amazing for me. It was magic when I got my flat and I would not have got to where I am not, without the help of my Salvation Army case worker, Sharon.

"My life has turned around 360 degrees. I feel better physically and mentally. I'm in a good place now and I couldn't be happier. My life is full of positive things. I have my two boys, an amazing girlfriend, Deborah, and new things to look forward to. We've recently been accepted for a bigger, two bedroom flat which we can move into when lockdown is lifted, then the next thing I want to do is get a job. Hopefully now I can drive, it will open up more doors for me."

To show his appreciation for the help he has received from Housing First and the Salvation Army, Michael has signed up to do a sponsored skydive on August 30th to raise funds to help the homeless.

He said: "A skydive is something I've always wanted to do and I want to give something back to the people who helped me.

"I will be jumping out of a (perfectly good) plane from over 10,000ft and free-falling at a speed of up to 120mph, all for The Salvation Army's Housing First project. Please help me raise invaluable funds to fight homelessness."

Councillor Mhairi Hunter, Glasgow's Convener for Health and Social Care, congratulated Michael on his achievements and wished him good luck with his skydive.

She said: "Sadly, relationship breakdown is a major reason why many people, especially men, find themselves homeless, however, Michael's Housing First story has a happy ending. It is really heart-warming and

proves that Housing First is helping homeless people turn their lives around. This new approach doesn't just provide people with a roof over their heads, it also supports them to address any health issues they may have and look to the future.

"I'd like to congratulate Michael on the arrival of his second son and on all the constructive steps he's taken towards creating a happy and fulfilling future for himself and his family."

Anyone who would like to sponsor Michael can do so at http://www.justgiving.com/fundraising/mick-wright84