Glasgow City Council has agreed in principle to accept the offer of a funding contribution - from the owners of a housing development on the south bank of the River Clyde - to the creation of a new quay wall at Windmillcroft Quay, a Glasgow City Region City Deal project. 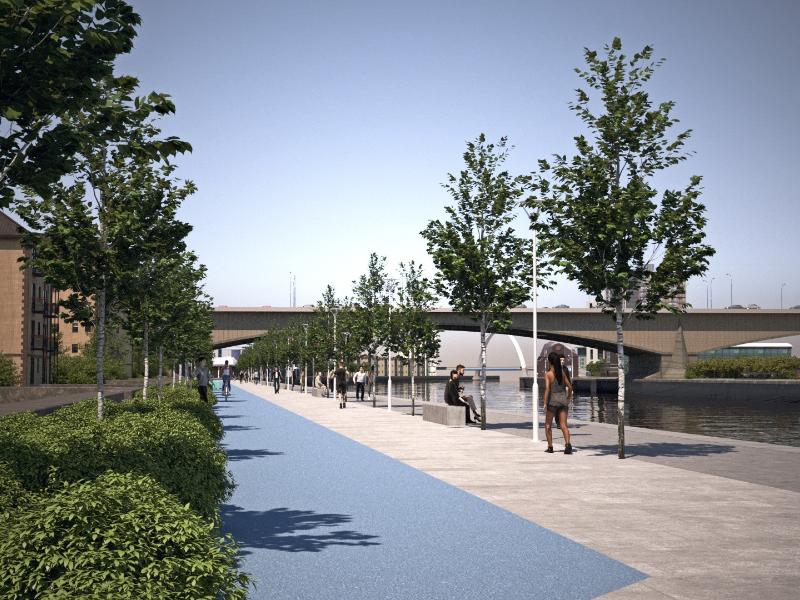 In 2014, the quay wall at Windmillcroft Quay was found to be in need of urgent repair, with the public walkway there having to be closed between Tradeston and Springfield Quay. Following this, in 2016 emergency demolition and replacement earthworks to temporarily stabilise a section of the quay wall were carried out (instructed by Spiers Gumley Property Management on behalf of the co-owners of the housing development).

Over the past five years, Glasgow City Council, Speirs Gumley and the co-owners of the 278 homes in the development have frequently engaged, to consider options to address the situation. The options considered included matters of the repair or renewal of the quay wall, the legal burden and financial support.

As a result, in June 2018 Speirs Gumley submitted an application for £11.6million grant funding from the Glasgow City Region City Deal. The funding application was based on the design appraisals and cost estimates at that time. This application was approved on the basis that Glasgow City Council carries out the project and the City Deal funding is supported by a contribution from the property owners.

In March 2020 an Extraordinary General Meeting (EGM) of the Waterfront Development concluded an almost unanimous decision in favour of providing a contribution of £1.39million (£5,000 x the 278 properties) toward the Windmillcroft Quay project. A further offer of £750,000 contribution is proposed; which is subject to negotiations between Speirs Gumley Property Management and a third party contributor.

The offer of the funding contribution from the co-owners has now been accepted by the council in principle, as subsequent negotiation may be necessary to address the technical, legal and financial issues related to the project.

Around £50million of the £113.9million funding for the City Deal: Clyde Waterfront and West End Innovation Quarter project (which aims to regenerate the river corridor as a desirable urban quarter that attracts jobs and investment) has been allocated to improving some of the quay walls in the area.

Improving the quay walls in locations such as Windmillcroft Quay and Custom House Quay will unlock the area's development potential, enhance connectivity, and improve the quality of places on the waterfront.

It is envisaged that the new quay wall would be built out on the riverbed, around 12 metres in front of the existing quay wall line, with a hybrid single and twin steel sheet structure, and an estimated cost of between £15 and £18million. The council would then own and adopt the new quay wall structure, the new land and the public realm.

Councillor Susan Aitken, Leader of Glasgow City Council and Chair of the Glasgow City Region Cabinet, said: "Repairing the Windmillcroft Quay wall will not only benefit everyone who lives, works and visits there, but the entire city. We're going to create new, high-quality public space on the waterfront and better connectivity that will complement the huge amount of development activity taking place on along the Clyde."

The project is due to commence with detailed design development in June 2020, with a site start expected in January 2022.