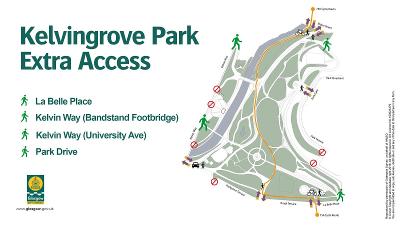 Four gates at Kelvingrove Park are to be unlocked in time for children and young people walking or cycling to school for the first day of term tomorrow.

The gates were locked last month as part of a plan to address persistent, alcohol-fuelled anti-social behaviour within the park, which included violence, disorder, flouting of physical distancing rules, public urination and widespread littering.

Closing ten out of sixteen park gates has helped council staff and police to manage access to Kelvingrove on busy days and prevent alcohol being brought into the park. The measures have led to a substantial reduction in anti-social behaviour within the park.

But in response to local concerns about the impact the gate closures will have on pupils who use the park to travel to school, gates at Kelvin Way (north), Kelvin Way (bandstand), La Belle Place at junction with Clifton St and Park Drive will be opened in time for tomorrow morning.

However, to ensure the plan to tackle anti-social behaviour can be implemented on busy days, these four entrances will be locked again. At this stage, the weather forecast is indicating a hot spell over the coming weekend and it is anticipated that ten out of sixteen gates will be locked on Saturday and Sunday (August 15, 16).

Andy Waddell, Director of Operations for Glasgow City Council, said: "It was not an easy decision to close gates at Kelvingrove, but it was necessary given the extent of the anti-social behaviour being experienced in the park.

"Closing gates has helped to enforce the park management rules, which prohibits the consumption of alcohol in the park. Preventing alcohol coming into the park has led to a significant and welcome change in the atmosphere within Kelvingrove.

"However, we have been listening to local views and we recognise that reopening certain gates will help children and young people who use the park as an active travel route to get to school. We are keeping the whole situation at Kelvingrove under review but for the time being it must stressed these gates may be closed again when the risk of anti-social behaviour requires further action."

It is anticipated that the practice of gate closures will remain in place for the remainder of the summer season.