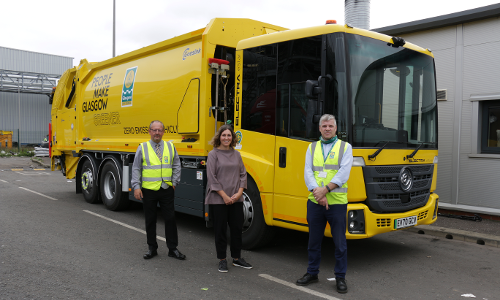 Glasgow is driving ahead with its effort to create a zero emissions fleet of vehicles with the council taking delivery of a fully electric bin lorry.

Cheaper to run and easier to maintain than its diesel equivalent, the lorry can support up to 1600 daily household bin collections and with the potential to remove between 20 and 25 tonnes of waste each day.  One of the first electric bin lorries in Scotland, it will operate on a zero emissions basis.

The vehicle can run on a single daily charge and it is expected the energy required for a daily round will cost up to 70% less than traditional fuel. With fewer working parts within the lorry, fewer repairs will be required.

The arrival of the electric bin in Glasgow has powered up the council's strategy to create a fleet of zero emissions vehicles and plant equipment by the end of 2029. As part of the strategy, the council has already taken delivery of over 300 electric cars and small vans. Twenty dual fuel hydrogen gritters are ready to be pressed into action during the winter months while a further 20 hydrogen powered refuse vehicles are scheduled to be delivered to the council next year.

Councillor Anna Richardson, City Convener for Sustainability and Carbon Reduction, says the new bin lorry demonstrates the determination to clean and green the council's fleet of vehicles. But also shows the commitment to investing in a modern cleansing service for the city.

Councillor Richardson said: "This is a fantastic vehicle that shows that our zero-emissions fleet strategy goes hand in hand with investment in our cleansing service.

"Our zero-emissions fleet strategy is a vital part of the city's work to become carbon neutral by 2030 and has laid down a mark for other fleet operators to follow. The strategy was about sending a very strong statement to the market that Glasgow wanted to decarbonise its fleet of vehicles. With the arrival of our new electric bin lorry we have clear evidence the market is responding to Glasgow's demand for cleaner and greener heavy vehicles.

"The specifications of the vehicle indicate the electric version will match the performance of the diesel equivalent and we will be looking very closely at this in the coming months. But it will be cheaper to run and easier to maintain, which is good news for our cleansing service. The vehicle is also quieter than a traditional vehicle and that is a definite plus for the environment in local communities."

The vehicle also comes equipped with a number of safety features, including 360 degree cameras that make it easier for the driver to see all around the vehicle. There are also sensors alongside the nearside of the vehicle that will provide the driver with a warning that a cyclist is passing close-by.

Once driver training has been completed, it is expected the lorry will be initially put to work in Glasgow's southside to carry waste collected from bins put onto the pavement by householders. The lorry will collect both general waste and dry mixed recycling, which can amount to between 10-15 tonnes of paper, cardboard, plastic bottles and metal cans each day.

With charging points installed at all four of Glasgow's main cleansing depots, the lorry will eventually be put to work in all parts of the city.

The new lorry was purchased with the support of a grant from Transport Scotland's Switched on Towns and Cities Fund, which is also providing assistance for the council to acquire new electric cars and vans as well as installing electric vehicle charging infrastructure.