Two historic Govan landmarks - the principal entrance gateway to Elder Park on Govan Road and the K13 submarine memorial - have been sensitively restored for future generations after work was carried out by Govan Cross Townscape Heritage Initiative, in collaboration with Glasgow Building Preservation Trust and Glasgow City Council. 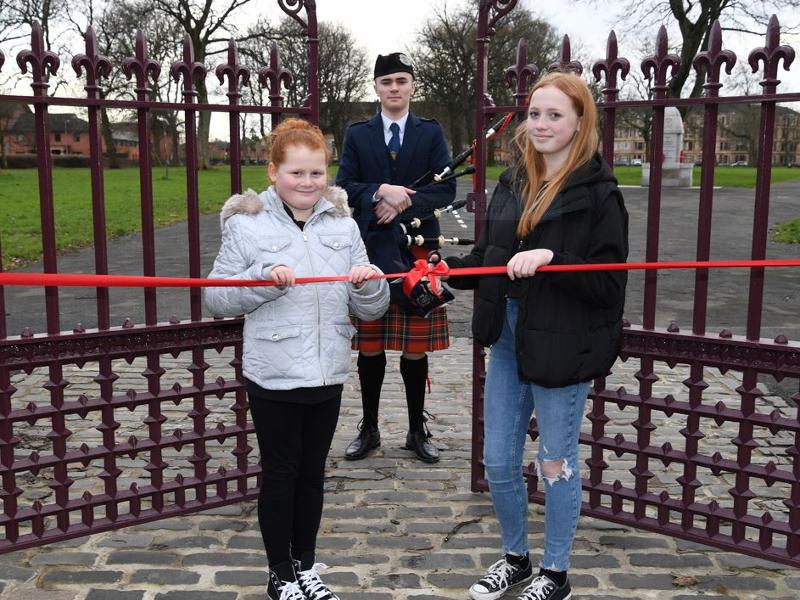 The works involved a holistic conservation approach. The sandstone blocks of the gate piers were dismantled and gently cleaned to assess the condition of carvings underneath a layer of moss, cement and dirt. Unfortunately, many of the original details such as decorative frieze on one of the octagonal pillars or the fish scales and gargoyle on the pillar cap were beyond repair and had to be replaced by skilled masons and carvers at Naughton masonry. The piers were reassembled on-site and pointed using lime mortar.

The missing cast iron gates and fence finials were re-cast at the Laing's Foundry from the original pattern preceded by a careful analysis of the original. The existing lamp was not a part of the original design and its condition was too poor to be reinstated. The new lamp standards were developed by Pollock Davies Patternmaker to match the original design based on historic research. Once fed by gas, now electric, the lamps crown the gate posts and shine the way into the park. The railing colour scheme based on paint analysis which indicated it had originally been a shade of red. The stunning works have restored Elder Park's elegant entrance way, which is once again on par with the other great parks of Glasgow and a delight for the people of Govan.

The K13 memorial, erected by the employees Fairfield Shipbuilding & Engineering Company in 1922, was dismantled, cleaned and rebuilt in time for the annual commemoration of the submarine disaster that claimed lives of 26 naval seamen and 6 Fairfield workers.

Alongside the repair works, a programme of engagement took place where possible during the pandemic when open spaces like Elder Park became invaluable during the lockdowns of 2020 and 2021. In association with the Friends of Elder Park, the project worked with residents, local groups and park users to create opportunities for people to celebrate their park as an important and historic community asset. A film documenting the restoration process and traditional skills involved is in the final stages of production and we look forward to sharing this with the community shortly. A short film about the K13 Disaster was produced and launched at Glasgow Doors Open Day 21, and this will be made available at future events by Fairfield Heritage, Govan.

Councillor Richard Bell, City Treasurer at Glasgow City Council, said: "The restoration of the gateway to Elder Park and the K13 submarine memorial is very welcome news for the people of Govan.  These are significant local landmarks, with remarkable backstories and it is fitting that this work was completed 100 years after the K13 memorial was first erected by Fairfield employees.  I'd like to pay testament to all the hard work of the partners to deliver these restorations, which are truly valuable to the local community."

Amy Eastwood, Head of Grants at Historic Environment Scotland, said: "Elder Park is a much-loved asset to the local community and we are pleased to support the works to the historic gates through the Govan Conservation Area Regeneration Scheme. The funding of £28,960 supported high quality, specialised conservation works to be carried out on the gates which are an important part of Govan's heritage."

Andy Knox, Chair of the West of Scotland Submariner Association, said: "K13 is one of the most important events on our annual calendar. Coming now and seeing it in all of its glory, it's fantastic."

Govan Cross Townscape Heritage Initiative (THI) was set up in 2009 to help regenerate Govan by repairing, restoring and preserving the area's exceptional heritage features and historic buildings. It is a grant giving initiative funded by Glasgow City Council, the National Lottery Heritage Fund and in 2016 a Conservation Area Regeneration Scheme was also incorporated, funded by Historic Environment Scotland. The THI has invested £6 million of grant funding in Govan between 2009-23 to:

● Improve Govan's shopfronts by restoring them to their traditional design;

● Enhance the appearance of Govan Cross through improvements to the public realm;

● Bring history to life, offer opportunities to learn about and promote Govan's rich heritage, and provide training and job opportunities linked to the conservation of traditional buildings and historic environments.

After the death of her husband John Elder in 1869, Isabella Elder, née Ure (1828-1905) ran his Govan shipyards for 9 months, a remarkable role for a woman at that time. She then went on to play a significant role as a benefactress in the Govan and further afield, taking a specific interest in health and wellbeing, and education.

Like many wealthy philanthropists of her era she was well placed financially and socially to make these gifts, and it seems she took the responsibility of this privilege very seriously, by building in future funding and legal obligations to ensure her endowments continued to serve the people they were intended for.

Alongside physical assets like the park, library and hospital, she devised and made significant contributions to numerous funds progressing the educational rights and needs of women. The model for her School for Domestic Economy was exported overseas, and her persistence led to educational equity enabling Scotland's first women graduates to qualify in Medicine.

Elder Park was designed by John Honeyman and gifted to the Govan community on 27 June 1885 by Isabella Elder, who dedicated the park in memory of her husband John Elder (of Fairfield Shipyard) and his father David Elder. A grand public opening ceremony was attended by 8,000 employees of local businesses and 6,000 pupils from local Sunday Schools. Originally the park included a flower parterre, bandstand, model yacht sailing pond and superintendent's cottage with waiting rooms, a flagstaff, sixty garden seats, glass houses, tool houses and six drinking fountains.

The entrance is an important historic component of the park, the gates originally manufactured by George Smith and Company's Sun Foundry and gas lanterns from Walter MacFarlane's Saracen Foundry. Traditional craftspeople expertly recreated the gates from one surviving fragment; created a new pattern to cast the lamps; and new stonework was carefully carved and indented where the original stone had deteriorated too far.

The K13 memorial is one of a number of monuments commemorating the lives of those lost when the HMS K13 steam-propelled First World War submarine sank during sea trials in the Gareloch on 29th January 1917. Salvaged and recommissioned as HMS K22, she had been built at the Fairfield Shipyard in Govan. Memorials were erected at Faslane on the Gareloch and even New South Wales, Australia. The memorial in Elder Park was funded by "officials, foremen and employees" of the Fairfield Shipbuilding and Engineering Company in honour of the six colleagues and twenty-six naval men lost in the disaster. The Submariners Association hold a service each January in remembrance of those who lost their lives.

About The National Lottery Heritage Fund

Using money raised by the National Lottery, we Inspire, leadandresource the UK's heritage to create positive and lasting change for people and communities, now and in the future. www.heritagefund.org.uk. Since The National Lottery began in 1994, National Lottery players have raised over £43 billion for projects and more than 635,000 grants have been awarded across the UK.