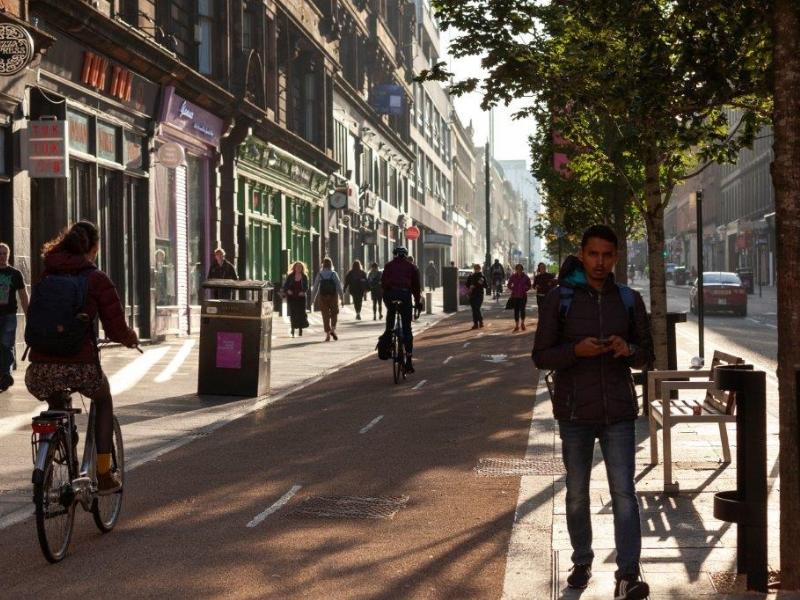 Glasgow's new transport strategy has set a direction for tackling the climate emergency and city inequalities.

Following extensive consultation and preparation since 2020, the final policy framework for the Glasgow Transport Strategy has now been approved by the council's City Administration Committee.  It's first time since 2007 that the vision for how to get about Glasgow has been renewed with the strategy setting out almost 150 policies that also seek to support the city's economic success and create thriving, liveable neighbourhoods.

With vehicle emissions accounting for almost a third of the city's carbon output, changes to the transport system are regarded as a vital component in Glasgow's effort to achieve carbon neutrality by 2030.  A key ambition for the new strategy is to reduce car vehicle kilometres travelled in Glasgow by 30% by 2030.  The aim is to encourage travellers to opt for sustainable transport choices such as walking, wheeling or cycling or public transport wherever possible so there is less need to travel by car.

Support for the 30% target comes from initiatives such as the council's Active Travel Strategy, which includes a proposal to build a city-wide network of segregated cycling infrastructure, and the Liveable Neighbourhoods initiative that will support more local access to essential services and enable shorter, local trips by walking, wheeling and cycling.

Major projects such as the Clyde Metro, which recently received backing in the Scottish Government's Strategic Transport Projects Review, and work to make bus services more attractive and efficient are also crucial to the effort to provide a world-class public transport network that draws people from their personal vehicles.

The policy framework also establishes objectives on such as issues as personal security, a smart and digital city, effective movement of goods, how to achieve behaviour change, improving air quality, bike sharing, maintenance and shared mobility via car clubs.

With 27% of vehicle journeys in Glasgow one kilometre or less, Councillor Anna Richardson, City Convener for Sustainability and Carbon Reduction, believes the new strategy provides a badly needed way forward.

Councillor Richardson said: "An overhaul of Glasgow's transport plans has been long overdue and I'm delighted we now have a new transport strategy to help us deal with some of the major issues facing the city.

"The policies contained within the new strategy will be play a key role in Glasgow's effort to take on climate change. But just as importantly the strategy also provides a basis for a just transition to a cleaner, more sustainable city.

"It's well-known that almost half of Glasgow households do not have access to a private vehicle. If we are to address the inequalities faced by so many of our citizens then we must create a transport system that provides affordable and accessible travel for all. It is essential that we rebalance our streets to ensure walking, wheeling, cycling or public transport are viable alternatives to private car use.

"Cars and other private vehicles will remain part of Glasgow's transport future. But cars are currently the largest producer of transport-related carbon emissions and a huge number of vehicle journeys are 1km or less. There is significant potential to create a shift to sustainable transport options and the new strategy is focused on how to support that change in travel behaviour."

The Scottish Government recently set a target of reducing car kilometres by 20% and other major cities such as London and Edinburgh have also similar ambitions. The recently published Route Map to achieve the 20% reduction nationally highlights the expectation that car use in rural and island communities will not necessarily reduce at the same rate as in towns and cities, and there is therefore the expectation that cities will contribute strongly to the national target.

The Glasgow Transport Strategy Policy Framework is the result of almost two years of evidence gathering and public and stakeholder engagement.  A Public Conversation on Glasgow's Transport Future began in 2020 with over 3500 responses received on the issues the transport strategy needed to tackle and was followed by discussion period on the Draft Policy Framework in 2021.

The Policy Framework draws on evidence of the problems highlighted by all consultees, which has in turn helped to establish the objectives of the strategy. The voices of the public, stakeholders and community representatives have been central to the development of the policy framework.