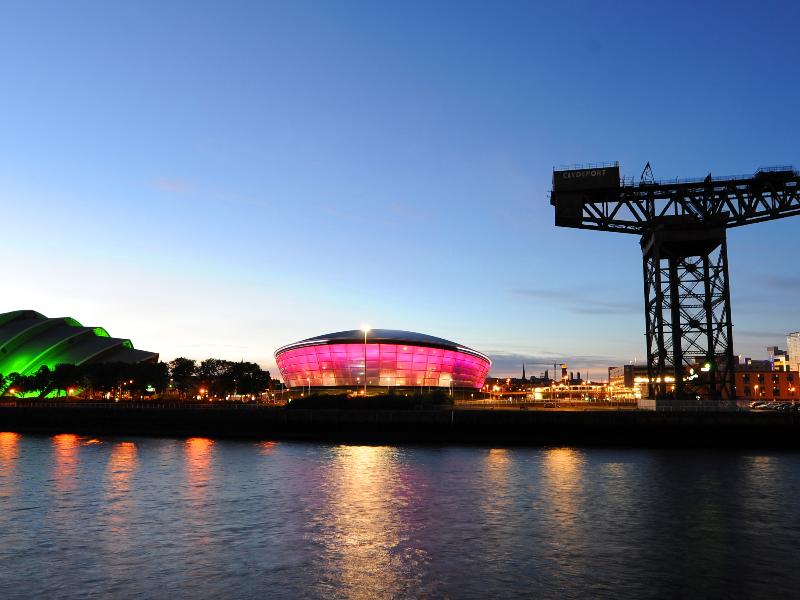 A boom is set to be built on the River Clyde to net plastic and litter pollution before it heads downstream.

A new environmental scheme will see a steel boom suspended across part of the Clyde to catch debris as it flows towards the sea.

Glasgow City Council will remove, weigh and analyse litter caught in the device in a bid to identify the most common types of litter in the river.

The council has teamed up with Marine Scotland, SEPA and Peel Ports to deliver a one year pilot project tackling marine pollution. The boom will be made of steel mesh panels suspended on floats. It will not impede the passage of fish or other wildlife which will be able to swim under and around it. The removal of debris from the water will also improve the wildlife habitat. Rubbish in rivers can release toxic chemicals which can harm fish and other wildlife which can also ingest or get tangled in litter.

The best location for the boom is currently being decided, but it will be below the weir and will not cross the deepest part of the river channel which is used by boats.

The project aims to reduce litter in the river and also stop it being swept downstream to places like the Arrochar Litter Sink - a spot where winds and tides deliver large amounts of rubbish - including litter from the Clyde. The foreshore at Arrochar lies at the head of Loch Long, a sea loch off the Firth of Clyde.

Marine Scotland believes litter on the Arrochar foreshore comes equally from the Irish Sea and the Clyde River. In total, they deliver about 62,000 items of litter mixed with seaweed onto the shore each year. The seaweed was previously used as garden fertiliser by local residents, but it is now so contaminated with litter that it is no longer possible.

The Clyde starts in the Lowther Hills in South Lanarkshire and is Scotland's third longest river at around 110 miles long. Arrochar foreshore receives about 11% of all marine litter entering the Clyde.

Litter dropped in communities all along its banks can easily get blown into the river by the wind then travel downstream to contaminate our seas and beaches, endangering marine life.

Pupils from Sunnyside School of Conservation have previously travelled to Arrochar to take part in an annual litter pick on the foreshore. The award-winning Sunnyside Ocean Defenders successfully campaigned for a ban on plastic straws to protect seabirds, whales and dolphins which can swallow plastics if they end up in the sea and they continue to highlight the dangers posed to our oceans by litter.

Olivia Paterson aged 12 of Sunnyside School said: "Sunnyside Ocean Defenders are beaming about Glasgow booming! As regular cleaners of beaches and our city's streets, we know that the litter dropped here in Glasgow can make it to the coast. We are delighted that Glasgow City Council is putting a boom in to collect litter floating down the Clyde to the ocean."

The boom project support Glasgow's Plastics Reduction Strategy, released in 2019, to tackle waste in the River Clyde and its tributaries as a preventative approach to marine pollution.

Councillor Angus Millar, Glasgow's Climate Convener, said: "Marine litter damages the environment and can harm wildlife. Removing it from the Clyde using passive technology like a boom is an environmentally friendly way to tackle the problem. The project will not only benefit Glasgow, local wildlife and migrating fish, it will also help reduce the levels of rubbish reaching destinations downstream - including the Arrochar foreshore.

"The council supports Keep Scotland Beautiful's Upstream Battle campaign and if the boom is successful, it will become a permanent feature on the Clyde. Hopefully this project will spark a ripple effect and inspire other towns and villages along the Clyde to do something similar, further reducing the amount of litter which is washed downstream and the levels of microplastics in our waterways."