High-rise cyclists get a lift from new bike stores 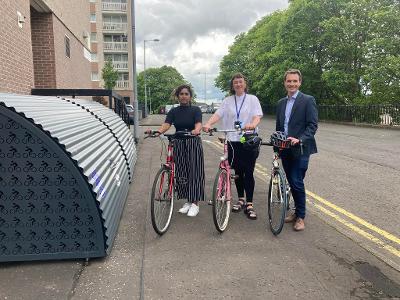 High-rise residents on Glasgow's southside are being helped to get on their bikes thanks to a set of new ground floor cycle stores.

Living in multi-storey flats and cycling doesn't always go together due to limits on space in the home, a ban on keeping bikes on landings or stairwells due to safety reasons and the hassle of getting the bike up and down in the lift or stairs.

But with the installation of 19 secure, cycle storage units next to apartment blocks in Cardonald and Pollokshields, Southside Housing Association is aiming to remove a significant barrier to cycling for almost one hundred of their residents.

The initiative is part of a scheme backed by Glasgow City Council and Cycling Scotland that supports social housing providers to improve cycling facilities for their tenants. It sits alongside the council's heavily subscribed cycle shelter scheme delivered in conjunction with operator, Cyclehoop, which is due to expand significantly over the next three years.

Councillor Angus Millar, City Convener for Transport, sees storage as a crucial component in the effort to encourage greater participation in cycling as part of the wider drive to support a shift to more sustainable forms of transport.

Councillor Millar said: "The recent Walking and Cycling Index report shows there is a huge desire for people to participate more regularly cycling in Glasgow and its our job to tap into this potential. But where to store a bike is a problem that puts people off cycling and so a lack of storage is a barrier that needs to be broken down.

"The rapid uptake of spaces in our storage scheme with Cyclehoop shows people in tenements and flats want their bike to be accessible and ready to use as a means of everyday transport. It is essential that we enhance the availability of cycle storage where ever we can and so it's great to see these new units going in for Southside Housing Association residents.

"In a city where so many of us do not have access to a car, creating viable alternatives for getting about Glasgow is not only a matter of fairness but also crucial for reducing transport-related carbon emissions. Increasing the availability of cycle storage can help to support the shift to more sustainable forms of transport that's needed as part of the fight against climate change."

The secure spaces for ninety-nine bikes next to Southside HA flats on St Andrews Crescent and Swinton Place has been funded through national schemes on air quality and active travel. The council and the housing association worked together to deliver the scheme and as well as making cycling more accessible for residents, the units will also reduce the risk of bikes being stolen from stairwells and other communal areas.

Margaret McIntyre, Chairperson of Southside Housing Association said: "We are delighted to be able to offer residents in Cardonald and Pollokshields secure, street level cycle storage.  Many of our residents live in multi storey buildings and the new storage offers a more convenient way to store their bikes.  We hope that the new units will also encourage more residents to cycle, improving their health and well-being".

Roseline Kamaleswaran, resident from Swinton Place in Cardonald, said; "I'm really looking forward to being allocated a cycle storage space to store her bike.  It will save space in my flat and will avoid the hassle of taking it into the lift each time."

Glasgow City Council has been working with Cycling Scotland to encourage more residents of social housing to participate in active travel with a focus on providing suitable storage. Funding for the Southside HA shelters came from the Air Quality Action Plan and the Cycling Walking Safer Routes, both of which are Scottish Government supported schemes.