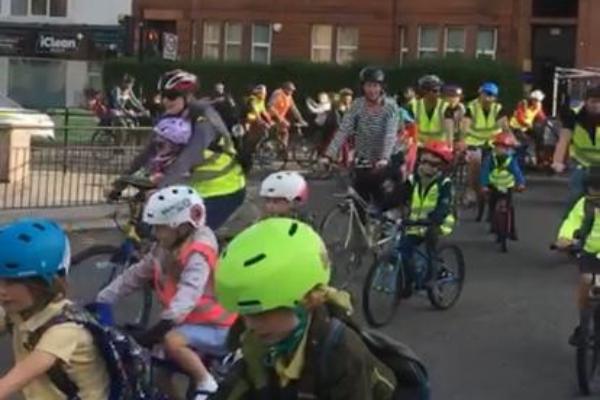 A bike bus route in the southside of Glasgow has been made safer thanks to an innovative, bike-mounted, remote-controlled device that holds traffic to let the children cross, in good time.

In what is believed to be a first of its kind in the UK, new, smart technology from a wireless transmitter, developed for Glasgow City Council, sends a signal to hold traffic at an extremely busy junction, allowing the large group of children on bikes and scooters, to cross safely, on their journey to school.

The Ultra-Smart Cycle System, mounted on the Shawlands Bus Bike lead rider's bike, uses a military-grade encrypted signal that, when pressed on approach to the junction, sets a specially timed traffic light cycle in motion to hold traffic for 45 seconds, enough time to get all of the riders through.

The signal is only accepted by the control unit, mounted on a traffic pole, on a pre-programmed day, during an agreed period - so it is perfect for the once-a-week bike ride that passes through the junction between 8:30am and 9:00am, on Fridays.

The Shawlands Bike Bus collects children from the local area, travelling to school by bike, and escorts them along a prescribed route finishing at Shawlands Primary School, in time for the beginning of the school day.

Part of the route includes the extremely busy Shawlands Cross junction and involves a right turn into Kilmarnock Road. The large group had previously experienced problems with crossing the junction in time and frustrated drivers moving too close to the children and using their horns.

The council's Road Safety Unit had provided support in the form of Hi-Viz vests, cycle helmet cameras and banners along the bike bus route to inform drivers of the Friday event and Police Scotland had also lent their support by riding with the children.

However, it was the council's TRAFFCOM traffic management service that finally found a solution to getting the, sometimes 50 or 60, riders across the junction safely and at once by detecting the bikes and holding traffic for a little longer than usual.

The system is based on technology used to sense the presence of bikes at certain junctions in Glasgow. But it has been developed to allow the signal to be emitted from a 'wireless button' or remote control, fixed to a bike.

Working with, Preston-based, Sm@rt Technology a prototype was developed, and a 3D unit printed to form the wireless button. With successful development and testing over the summer the Ultra Smart Cycle System was used by the Shawlands Bike Bus for the first-time last Friday.

Councillor Angus Millar, the city's climate convenor, said: "We are always looking for new and innovative ways to provide safe, active travel routes for everyone and I am delighted that council colleagues were able to offer a solution to this problem in a very short space of time, during the school break.

"Making cycling a safe, easy and attractive option for people and especially young people is at the heart of our efforts to promote sustainable transport.

"This bit of kit is a fairly simple solution to a road safety problem that is probably experienced in cities up and down the country and I hope that what we've developed for Glasgow can be replicated to help similar bike bus schemes."

Gareth Johnson, one of the organisers of the Shawlands Bike Bus, said; "Ultimately we'd like safe segregated cycle infrastructure so all children in Glasgow that want to can safely cycle to school, but in the interim, we are extremely grateful to the council for providing this new bit of technology.

"The junction is really busy and with a lot of young children on our bike bus giving us that little bit of extra time to safely navigate the junction is a game-changer for us."

Steve Pearson, CEO of Sm@rt Technology, whose company developed the prototype for the council, said: "We're happy to have helped Glasgow City Council with the development of a solution that benefits the community with what is undoubtedly a great initiative."

Following the success of the Shawlands Bike Bus the council is in talks with parents from six other schools across the city, who are looking to develop safe cycle to school routes.