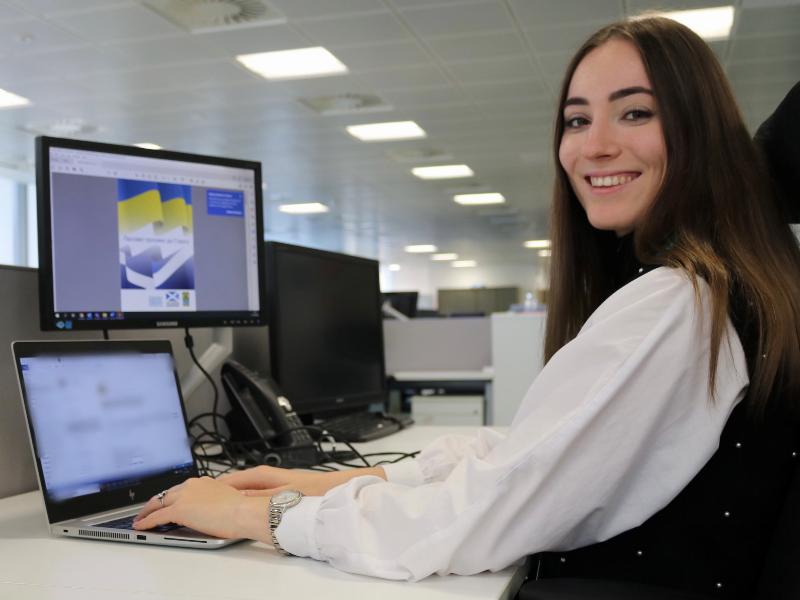 A woman who fled the war in Ukraine to travel to safety in Scotland has used her own experience to help other refugees.

Mariia Khapun left her homeland and hometown, Kyiv, to escape Russian invaders. She risked her life to travel alone, through the fighting to Poland then on to Scotland, where she has now landed a job with Glasgow City Council.

As part of her new role, the 24-year-old helped compile a Welcome Pack for hundreds of Ukrainian refugees temporarily accommodated by the Scottish Government on MS Ambition.

Her language skills and personal insight into the ordeal people faced fleeing the war, the strain of separation from loved ones and the confusion of starting life in a new country, meant she understood the information they needed.

Initially, on arrival in Glasgow, Mariia was accommodated in a hotel before being taken in by a local host family and she has now found her own privately rented flat in the city where her parents and 13-year-old brother have managed to join her. However, her dentist fiancé is still in Ukraine, which is a constant worry.

She said: "I managed to get my younger brother and parents out of Ukraine three months after I got out, but my fiancé is still there and it is really hard being separated from him for a long time and knowing he is in danger. It's not just the shelling, people are suffering because the infrastructure has been destroyed. Often there is no water and the power keeps going off - obviously now it's winter time too. This winter will be especially hard - we all pray for the war to end soon."

Since arriving in Scotland, Mariia has been proactively looking for work and trying to find a flat, as her independence is important to her. She initially secured a temporary six month contract with Glasgow City Council and has now earned a permanent position as a Marketing Officer.
In Ukraine, she was director of a firm which rented out marquees for events and exhibitions and she has a Master's degree in International Economic Relations and English Translation.

She said: "I couldn't work in Ukraine anymore, because almost all the businesses had to shut down or almost stop work. Places I grew up in had been destroyed and there was a lot of devastation. I knew I had to try to get out to safety and earn some money to support my family.
"At first, I was worried about starting a new job at Glasgow City Council, because I didn't know anyone and was anxious about fitting in, but people have been very kind and supportive. They have made me feel comfortable and part of the team. I'm grateful for the opportunity."

Mariia has been overwhelmed by the warm welcome in Glasgow.

She said: "I'm very thankful to have met the couple who hosted me and that they were able to help me. They are open and kind people. I am really grateful to them for taking me into their home. I presented them an ornament made of Ukrainian amber to thank them. The Western part of my country is well known for its amber.

"My parents have met them now too and thanked them for all their help. When they were still in Ukraine and I was here alone, it was really important to my parents to know I was living somewhere safe."

He said: "I'm delighted that Mariia has successfully secured a job at the council after escaping the war in Ukraine. Obviously, what is happening in her homeland is horrendous, but it is great to hear that she is enjoying her new role and settling into Glasgow well. I hope she will come to consider Glasgow as a second home."