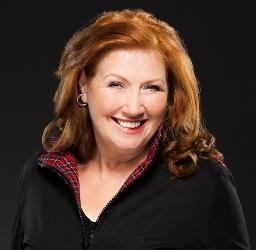 Libby's work has ranged from doing stand-up, to writing a weekly column, to being a Soap star! She has even narrated for the RSNO! Her work as an actor, writer and director has spanned more than three decades.

As an actor she has played wife to, Ford Keirnan, Fish and Andy Cameron, daughter to Miriam Margoyles, Annie Ross and Johnny Beattie, and sister to Andy Gray, Forbes Masson, and Bobby Carlyle.

Libby has also earned critical acclaim as a director, recently directing David Cosgrove's work, 'Voices in her Ear' at Oran Mor and the Traverse as well as 'Ma Bit' at the Tron Theatre for Toonspeak. At the 2014 Edinburgh Festival she directed George Gunn's 3000Trees. This year for the 'International Comedy Festival' she performed and directed 'A Different Drum' with 'OTAGO' theatre company which she set up with David Cosgrove.

Although she is best known for her role as the Oyster Café owner, Gina Rossi in River City, she has appeared in almost all of Scotland's returning TV series, including various Taggarts, High Road and Doctor Finlay, plus many more.