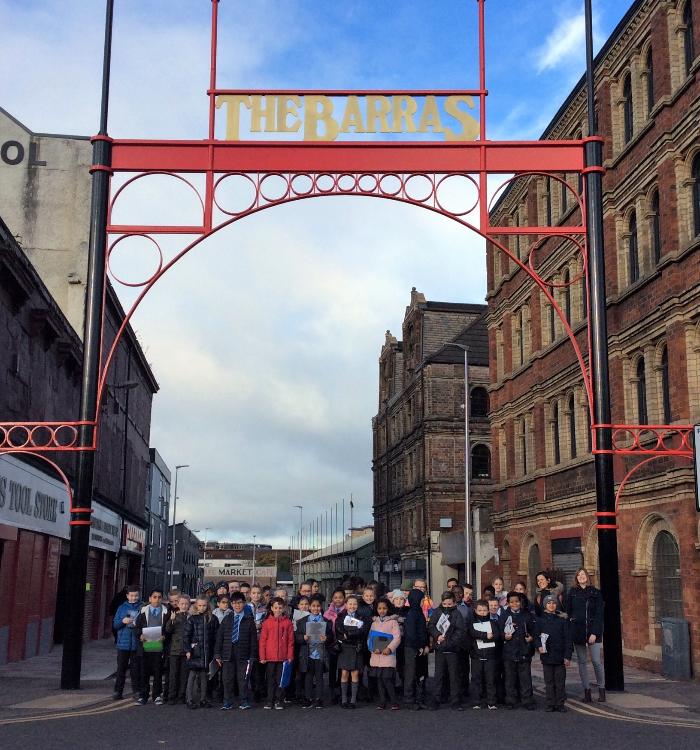 Excited pupils from a Calton primary school have embraced with enthusiasm, the chance to inspire the design of decorative paving slabs set to be installed at the site of each of the iconic The Barras signs.

The celebrated steel arches are looking resplendent, having recently undergone a programme of repairs and repainting by Covanburn Contracts, as part of major works to regenerate the Barras Public Realm through the Glasgow City Region City Deal.

The public realm works will greatly improve the attractiveness of the area as well as providing a much improved environment for pedestrians and cyclists. A further aim is to encourage people into the area which will generate higher footfall - sustaining the eclectic range of businesses in the area.

Armed with iPads for taking images, and traditional pencil and paper for sketching; the motivated youngsters from St Anne's, toured the streets, soaking up the sights and taking inspiration from their surroundings to use in forthcoming design workshops.

This artist-led project in association with the east end school, will see local surface designers, Bespoke Atelier take inspiration from the material produced by the children in future workshops, as stimulus to create the final four designs.

As well as closely studying the structure of the intricate The Barras signs, the pupils also had the chance to visit Barras Art & Design (BAAD), The Pipe Factory and Saint Luke's music and arts venue.

The undoubted highlight of the away day was a tour of the famous Barrowland Ballroom where the pupils enjoyed privileged access, including a spell on-stage and the chance to test the springiness of the renowned ballroom floor. The famous multi-coloured lights on the building façade were also switched on just for their visit, much to their delight.

Marie Hamilton, Depute Headteacher of St Anne's Primary School said; "Our children have responded to the chance to influence the design of the decorative slabs with wonderful enthusiasm. They thoroughly enjoyed their visit to The Barras and were very much inspired by what they saw. They're looking forward to the next stage of the design process - the workshops, where they'll get the opportunity to turn that inspiration into creative design ideas".

Marion Parola, Designer and Director at Bespoke Atelier said; "It's clear from the site visit that the children are fully engaged with the chance to influence the designs and that they are brimming with ideas. I can't wait to see what they come up with at the workshops we've planned for next month. It'll be a privilege to create work that'll be positioned at each of the four iconic The Barras signs and even better that the designs will be directly influenced by local school children".

Cllr Susan Aitken, Leader of Glasgow City Council and Chair of the Glasgow City Region City Deal Cabinet, said: "The Barras Public Realm project, funded by Glasgow City Deal is clearly breathing new life into the area which in itself is a gateway to the city centre and the east end. The Calton Barras Action Plan has achieved a significant amount in recent years and I'm delighted that through City Deal funding, the ongoing and future work we'll be doing with our partners will continue the transformation of this important part of Glasgow".

City Deal funding objectives for the Barras Public Realm includes the unlocking of the area's development potential and enabling the continuation of economic activity from the city centre to the East End and progressing the existing Calton Barras Action Plan by improving infrastructure, quality of land, and travel connections.