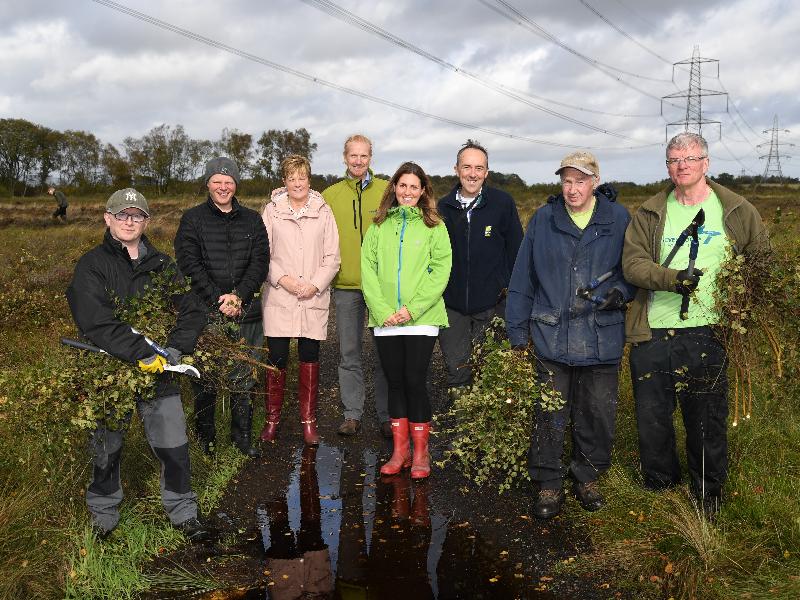 Work to ensure Glasgow's largest peat bog remains in pristine condition for the fight against climate change has been taking place as part of Climate Week.

Commonhead Moss covers a 25 hectare habitat at the far north-east corner of the city and plays a vital role in carbon capture for the city. It is also has a unique biodiversity and plays host to rare species such as bog rosemary and green hairstreak butterfly.

Believed to have existed for at least 4,500 years, the bog has the potential to capture over 100 tonnes of atmospheric carbon dioxide per year. But for the bog to capture carbon effectively, it is essential to maintain the level of water - the bog is 98% water - otherwise a dried out bog begins to release carbon.

Thanks to the efforts of a small team of hard working volunteers, water levels are being kept in balance. Scrub birch, which draws water out of the bog, is being cut back and small dams that hold water in place are being maintained.

Ensuring the ground remains as wet as possible allows for the growth of sphagnum mosses, which are crucial for the build-up of peat.

Councillor Anna Richardson, City Convener for Sustainability and Carbon Reduction, and Councillor Maureen Burke, Chair of the Seven Lochs Partnership visited Commonhead Moss to learn more about how the bog functions and also of the work of The Conservation Volunteers at Seven Lochs Wetland Park.

Councillor Richardson said: "It's remarkable that such a habitat exists within the Glasgow city boundary. Commonhead Moss is a rich and diverse environment and is a real asset to the city.

"Peat bogs are superb at drawing out carbon from the atmosphere and it is essential that these environments are carefully maintained. Commonhead Moss falls within the Seven Lochs Wetland Park and the partnership is doing a fantastic job at managing this vast area.

"But I really have to applaud the team of volunteers who have been directly involved in the hard work of keeping the bog in good order. Their passion for the environment was obvious and their efforts will be making a tangible difference to the city's carbon reduction objectives."

Commonhead Moss is one of six peat bogs found within the Glasgow, all which of are located in Greater Easterhouse area. The Seven Lochs Wetland Park project is a partnership between Glasgow City Council, North Lanarkshire Council, Forest Enterprise Scotland, Scottish Natural Heritage and The Conservation Volunteers Scotland.

More information can be found at www.sevenlochs.org