A thriving city: Glasgow looks to its COP26 legacy 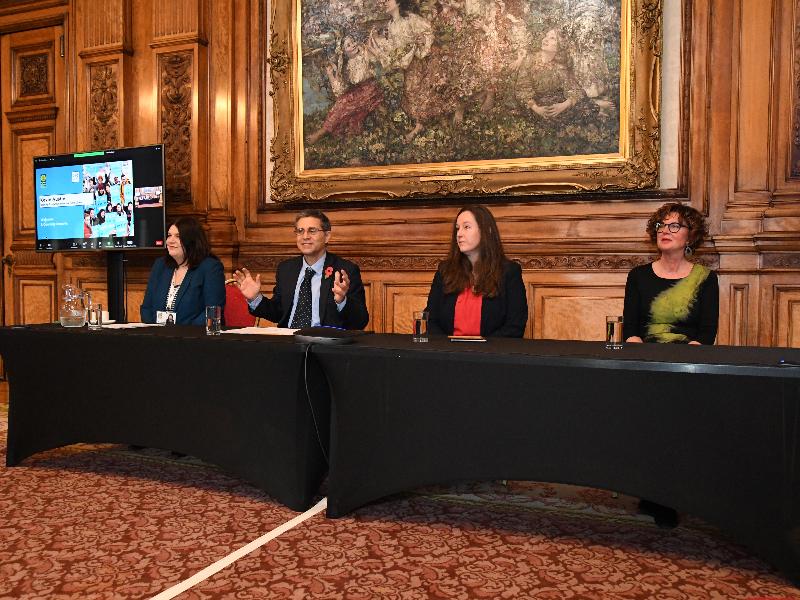 Today Glasgow marks a new milestone as it formally launches its ambition to become a thriving city - a key legacy of its hosting of the COP26 Climate Conference.

Launched at the Glasgow City Chambers this morning, Leader of the Council Cllr Susan Aitken was joined by a prominent panel of speakers as she set out her vision for Glasgow to thrive in the 21st century.

Accompanied by Kate Raworth, economist and author of "Doughnut Economics", Jaime Toney, Director of the Centre for Sustainable Solutions at the University of Glasgow and Eveline Jonkhoffof the City of Amsterdam, the panel discussed the ways in which Glasgow can work with the initiative to move on the path towards 'thriving'.

The Initiative itself is a two-year pilot project for pioneering cities that recognise the need to tackle harmful, unsustainable consumption and transition to more equitable and sustainable economies to meet the Paris Climate Agreement goals. Thriving cities rethink systems, to foster community led action and new business models, that support all people to access a good life within planetary boundaries.

Glasgow under Councillor Aitken's leadership has been a beacon of change with ambitious targets and actions to tackle the climate and ecological emergency. By supporting Glasgow's existing plans, the initiative will be one part of the wider legacy of COP26, helping Glasgow achieve its ambitious climate goal of net-zero carbon by 2030 and becoming a circular city by 2045, whilst maximising benefits for locals.

The plan is to co-create a thriving vision and plan with local communities and businesses, arts and culture, sports and academic institutions, to develop  a city that allows everyone an opportunity to thrive without harming others or the planet.

The aim is to create systems that incentivise social enterprise and sustainable economic activity that generates good jobs and improved quality of life for Glaswegians who face the greatest disparities, whilst reducing consumption emissions and creating a better, sustainable way of living, unique to Glasgow.

Mark Watts, Executive Director of C40 Cities, a network of nearly 100 mayors of the world's leading cities who are working to deliver urgent action on climate change, said "We have less than 10 years to achieve 1.5 degrees. The cities that aim for thriving within planetary boundaries, are the cities that recognise the need for total systems change by 2030.

"This means rethinking the systems and structures that drive inequity and climate change, to allow all people to have a good life, without pushing the planet out of balance. Thriving cities take an empathic and empowering approach to reimagine urban lifestyles, focussing on what the people of the city collectively value, co-creating actions with the people and local businesses who want to lead the change."

Regarding the launch, Cllr Aitken said "Our city motto is 'Let Glasgow Flourish'. As COP26 hosts, we have a unique opportunity to do just that, to place our citizens front and centre of the transition to Net Zero and deliver a more prosperous, healthier and greener city.

"Becoming a Thriving City adds real purpose and momentum to these ambitions, helping ensure Glasgow's existing polices and actions to improve the lives and well-being of Glaswegians are delivered within planetary boundaries. As we continue to address our long-term social challenges and the cycles which perpetuate them, overshooting those boundaries will be the detriment of our progress elsewhere.

"This transition to Net Zero will require will big changes. Glasgow's last big transition following the demise of our heavy industries was neither fair nor just. This time we'll get it right. And the real practical knowledge, experience and expertise becoming a Thriving City brings to our city partnerships delivering climate and social justice will be invaluable in the decade ahead. We look forward to working together. "

Glasgow's story is, in many ways, the world's story. It charts a course from the carbon-intensive industries of the past to the low carbon and sustainable developments of the present. More than half the world's population now live in cities, so the solutions to the global climate emergency will have to be delivered through its cities.

As the recovery and renewal process from the pandemic begins, Glasgow looks to continue the legacy from its hosting of the climate conference as an exemplar city for Scotland and the UK, making a tangible reality out of the ambition for a green recovery.

The City of Glasgow now begins the community conversation on how it plans to transform to a thriving city - one where all people can access a good life within planetary boundaries, whilst reaching its target of net-zero carbon by 2030.