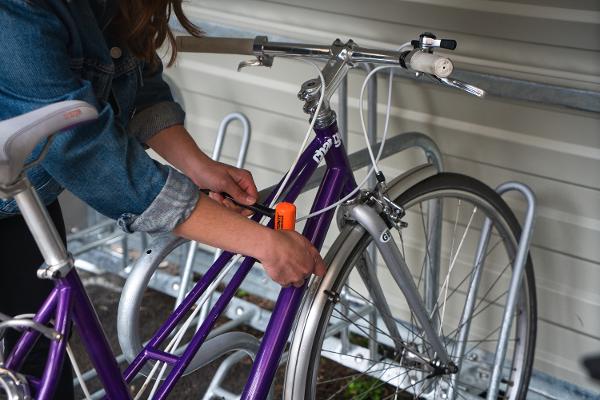 The expansion of Glasgow's secure on-street cycle storage scheme is set to continue over the next three years.

Demand for the shelters has been high since they were introduced last summer with 98% of spaces currently taken in the 61 shelters installed as a part of an initial pilot programme.  At present, around 1500 people are on a waiting list for a storage space with numerous suggestions made for new locations for shelters.

A second phase of bike store installations got underway last month with the aim of creating a further 70 storage units, which will provide 420 secure spaces for bikes owned by people living in the city's flats and tenements. All 60 spaces in the units installed so far in the second phase of work have been snapped up.

In a paper presented to the council's Environment, Sustainability and Carbon Reduction Policy Committee, it has been confirmed that 120 storage units are now planned for each of the next three years to try and meet demand for space.  This further expansion will ensure an additional 2160 secure cycle storage spaces will become available through the scheme.

Cllr Anna Richardson, City Convener for Sustainability and Carbon Reduction, said: "There has been a superb response to the cycle storage scheme and it's great to see new units being installed across the city. The 1500 name waiting list shows there is significant demand for safe and secure bike storage.

"Living in a flat can put people off cycling because they've nowhere to put their bike at home or it's unsafe leave it in the stairwell of their flats. So it's right we meet the demand for these shelters as it will help to make cycling a much easier option for everyday journeys for those who have a space.

"It's a great that a longer term commitment to expanding the secure cycle storage scheme is now in place.  Supporting a shift to more sustainable forms of transports such as a cycling is vital if we are to reduce the amount of carbon produced by our transport network. A lack of suitable storage is a barrier to regular cycling and so the bike shelter scheme has an important role in our effort to tackle the climate emergency."

New locations for the second phase of installation have been based on a number of factors including: demand and requests, Scottish Index of Multiple Derivation (SIMD), type of architecture, and proximity to existing or planned cycle routes.

Bike hangar provider, Cyclehoop, is currently managing the second phase of installation of 70 shelters at location around Glasgow, with work due to be completed by the start of April.

Architect Anthony Lau, Cyclehoop founder and design director, said: "With around 70% of Glasgow's homes in flat or tenements, it is no surprise the scheme has been so successfully adopted.  We designed the Bikehangar to enable those without accessible home storage, the chance to store their cycles safely and conveniently on the street, protected from theft and the elements. "

Applications are now open and residents can visit the Cyclehoop Rentals website www.cyclehoop.rentals to view locations and apply for a space.

Further information can be found in the paper presented to the Environment, Sustainability and Carbon Reduction Policy Committee on March 7, 2022. The paper is available through this link.