Shopkeeper Fined for Storing Fireworks in Ceiling Void Below Flats 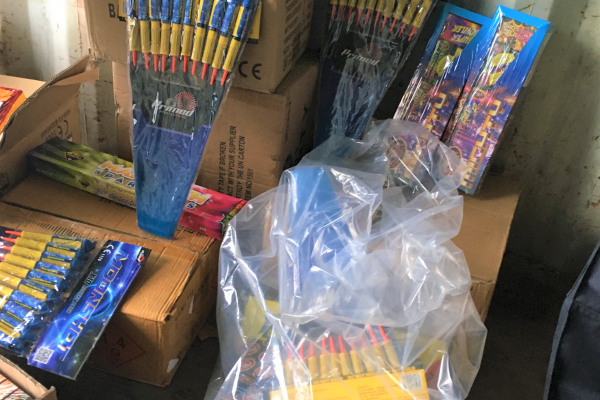 Glasgow City Council's Trading Standards team searched a shop in Pollokshields during an unannounced visit and discovered highly flammable fireworks in a ceiling void above a toilet.

The shop, ASR Gift Centre in Albert Drive, is below flats in a tenement building and the shopkeeper was not licensed to store fireworks.

The items were seized and, along with other evidence collected by the team on 29 October 2020, they helped secure a successful prosecution. Shopkeeper, Amjad Javed, was fined more than £1500 in total when he appeared at Glasgow Sheriff Court yesterday. (23/3/22)

Gary Walker, Glasgow City Council's Head of Community Safety and Regulatory Services, praised staff who made the seizure of rockets and other fireworks.

He said: "Fireworks are essentially explosives and can be very volatile if stored incorrectly. The way these items were stored was extremely dangerous - especially as there were people living in the flats above. They posed a serious fire risk which was discovered and removed during the team's visit.

"Antisocial behaviour involving fireworks is a real concern in the run up to Bonfire Night, particularly in areas like Pollokshields, and our Trading Standards team work closely with Police Scotland to ensure laws are being adhered to. Council teams carry out regular spot checks on retail premises to ensure retailers are complying with all relevant legislation and it was during one of those visits that this issue came to light."

The fireworks were confiscated and will be safely destroyed by Trading Standards.