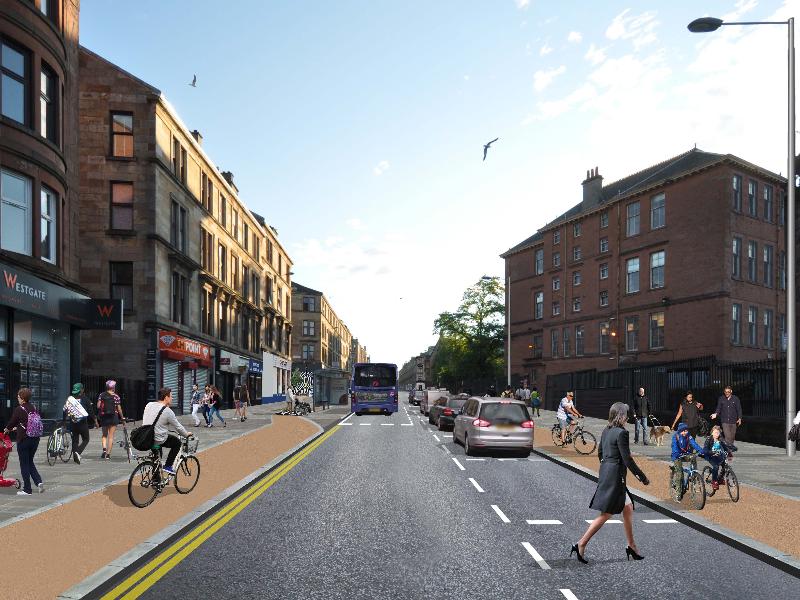 This Glasgow City Region City Deal project aims to rejuvenate the quality of the Byres Road streetscape and public realm to create a people-focused place that improves the pedestrian experience, enhances the economic vibrancy of shops and services, and makes the area more cycle- and environment-friendly.

The first phase of these works - Partick Cross to University Avenue - will begin in January 2023 and be complete by summer 2024.  Works will be delivered in phases to minimise disruption for local businesses. Works will be delivered by MacLay Civil Engineering, who have experience of delivering works in similar high street settings such as the public realm improvement works in Helensburgh town centre.

The second phase of these work - between University Avenue and Great Western Road - will be delivered under a separate contract and will commence following completion of the first phase.

The designs for the project have been informed by a series of engagement sessions and workshops that have taken place in recent years, and their main features include: the introduction of a one-way gyratory system at the southern end of the street; reducing the speed of traffic through the introduction of a 20mph speed limit; reducing the width of the carriageway and removing a number of on-street car parking bays to create additional pedestrian and cycling space; widening and upgrading of footways to make pedestrian movement along the street more relaxed and enjoyable and to reduce the width of crossing points; introduction of step-free crossings at side streets; enhancing 'key corners' to create distinct and attractive spaces along the street where people can sit and rest; and the introduction of protected cycle infrastructure including a contraflow cycle lane to allow cyclists a continuous route between Great Western Road and Partick Cross.

Councillor Susan Aitken, Leader of Glasgow City Council and Chair of the Glasgow City Region Cabinet, said: "Residents, businesses and everyone who comes to Byres Road will enjoy the benefit of this work, which will significantly improve the public realm there, raising the quality of pavements and public spaces, and making it easier for people using different modes of travel to get around this great Glasgow street."

John Turner, Chair of the Byres Road & Lanes Business Information District (BID) said: "We are very pleased that, after the considerable delays caused by the pandemic, the planned improvements to Byres Road will finally be getting underway early in 2023.  We are eagerly awaiting the completion of the works and trust that they will enhance Byres Road in its position as a top visitor destination. The Byres Road & Lanes BID is looking forward to working closely with the council and their contractors to ensure that the work, while necessary, will be done in such a way that will cause the minimum of disruption to the existing businesses and residents of the area. The message to everyone is: Byres Road is Open for Business!"

Scottish Government Business Minister Ivan McKee said: "This project will encourage cycling and walking in the West End of Glasgow, creating more liveable and sustainable communities, and is to be welcomed. The Scottish Government is funding the Glasgow City Region City deal in line with our National Strategy for Economic Transformation plans to promote greener local living and stronger regions."

UK Government Minister for Scotland Malcolm Offord said:  "It's fantastic to see the improvements to Byres Road begin enhancing the city's already vibrant West End. The new pedestrian and cycle routes alongside the creation of eco-friendly spaces will make space for both residents and visitors to enjoy.  The UK Government is investing £49m in improvements to Glasgow's Waterfront and West End Innovation Quarter as part of our £523m support for the Glasgow City Region Deal."

This work will complement the significant capital investment being delivered by the University of Glasgow through its campus re-development.